Part two of this series by Aaron Sigmond on cigar-based timepieces (those inspired by hand-rolled puros and/or offered by noteworthy tobacconists) chronicles brands including Hublot, Bell & Ross and Accutron 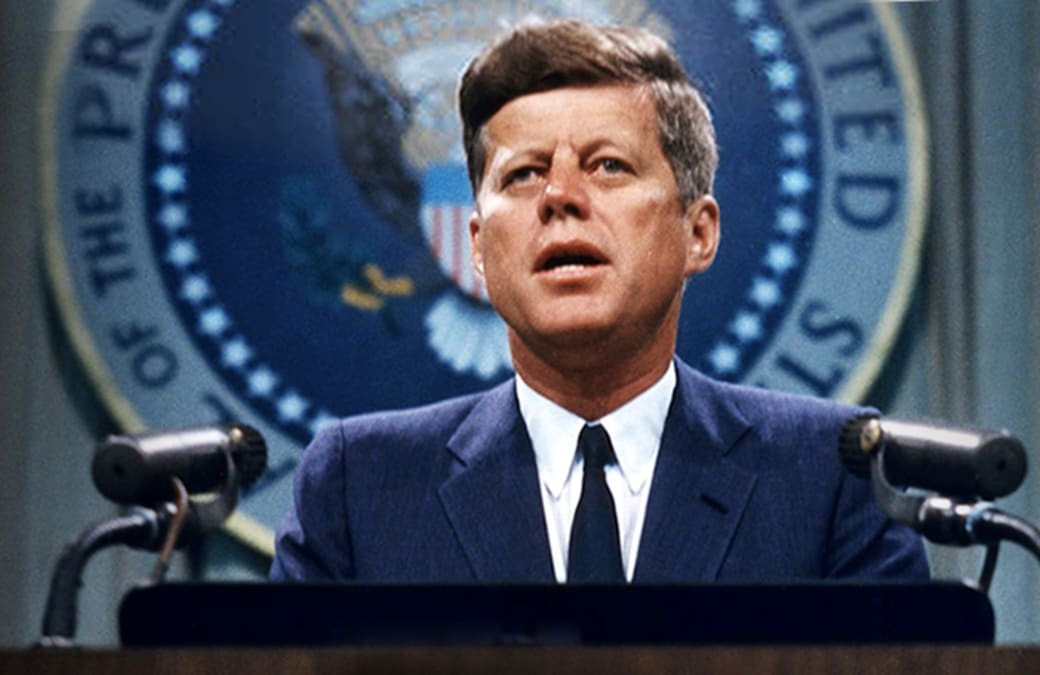 What these four luxury houses, and the cigar-inspired watches that resulted, had in common was that they were (intentionally or otherwise) made for a broader European and Asian clientele. However, the cigar world has been bifurcated since 1962, when John F. Kennedy imposed the U.S. trade embargo on Cuban goods. (No Havana cigars, Cuban tobacco, or rum have been legally imported commercially to the United States or its territories since; the embargo remains in effect to this day.) As such, a powerful vacuum resulted, given that the U.S. was, and remains, one of the world’s largest premium and ultra-premium cigar markets. This void would be filled by the nascent (relative to the history of the Cuban cigar trade) tobacco farming and cigar industries of the Dominican Republic, Nicaragua, Honduras, and Ecuador, as well as the cigar tobaccos grown in Florida and Connecticut, U.S.A.. This in turn led to a host of new cigar brands, as well as American-market versions of historic legacy Cuban brands rolled with non-Cuban leaves. Two brands, Dunhill and Davidoff, departed Cuba; Davidoff would then expand greatly in the U.S. 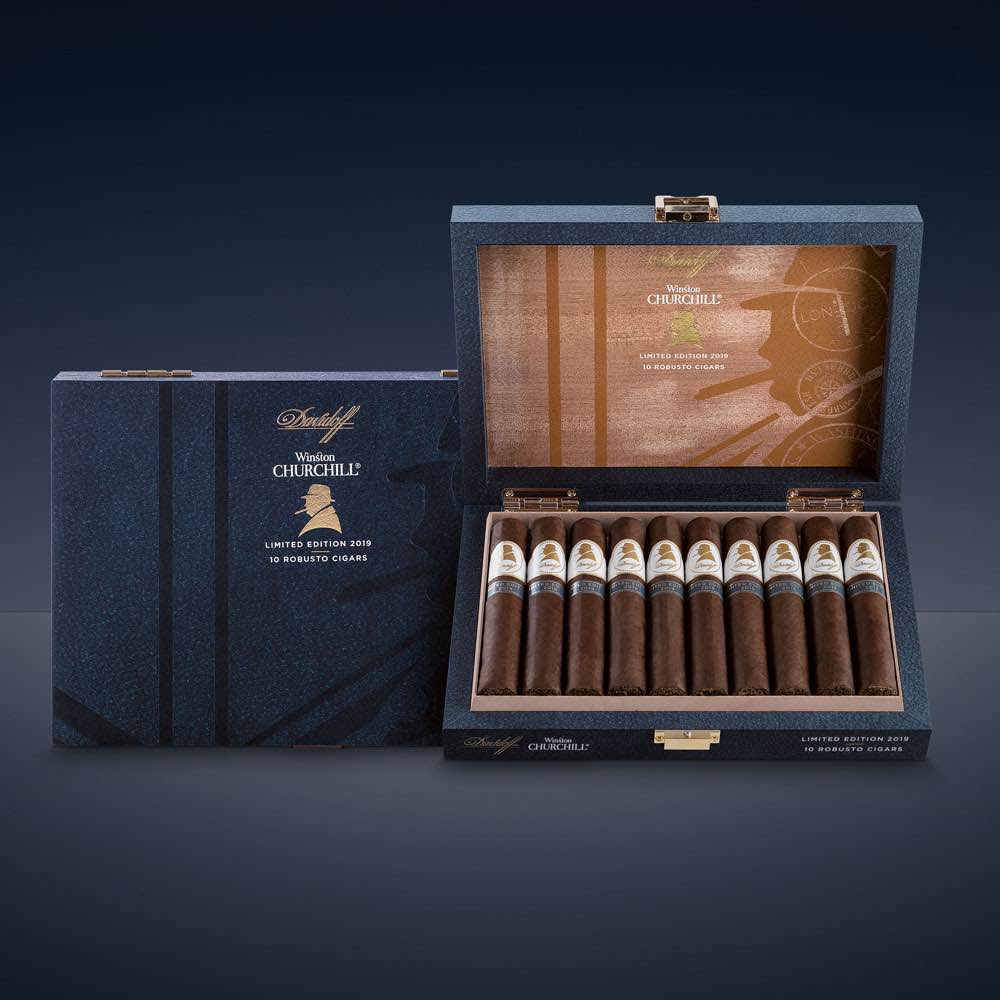 While those previous watches were more global in nature, these in Part 2 were created either with the American market in mind or were exclusive to the United States. (That said, the Fuente Fuente OpusX cigars, the first examined here, have an enormous international fan base.) An overview:

Since 2012, watchmaking and cigar rolling have been entwined via an ongoing (periodic) collaboration between Hublot and premium Dominican cigar maker Arturo Fuente, with timepieces that often (though not exclusively) celebrate the limited-production Fuente Fuente OpusX series. —the first-ever Dominican puro cigar. 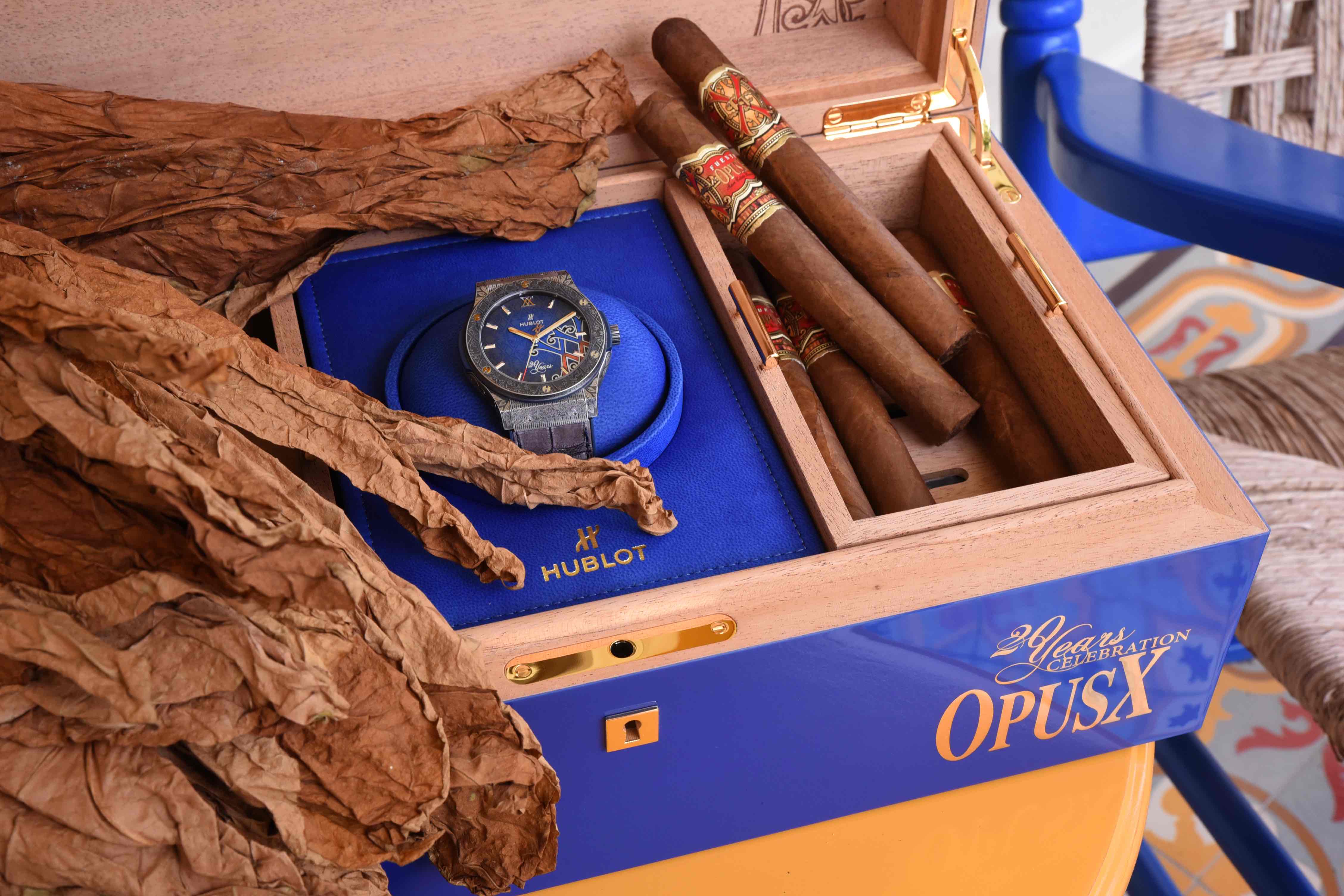 This alliance has yielded 14 limited-edition watch models within five capsule collections/releases thus far. The first was the 48mm Hublot King Power Arturo Fuente, crafted in honor of Fuente’s centenary and offered in both gold and ceramic, housed in a Macassar ebony humidor that Hublot commissioned specifically for this project. This outstanding debut was followed three years later by the limited-edition Classic Fusion Forbidden X—which, intriguingly and impressively, featured an actual cigar-tobacco leaf from Château de la Fuente, hand-selected by Carlos “Carlito” Fuente Jr. himself, preserved in a

preserved in a proprietary epoxy on the dial and was even offered in a tourbillon version. After that came the Hublot Classic Fusion Fuente 20th Anniversary Special Edition in 2017. Like all its predecessors, it sold out—see the complete list below: 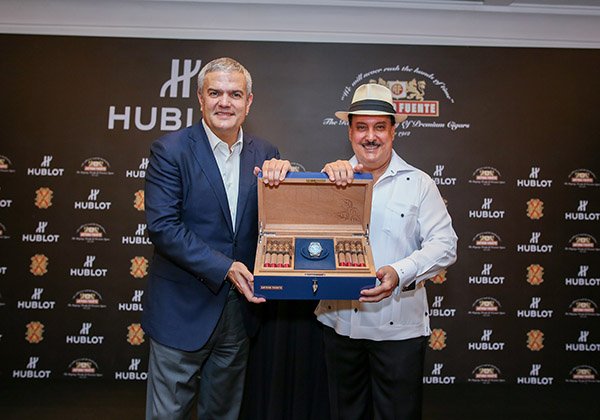 Why has this pairing been so fruitful? Hublot CEO Ricardo Guadalupe echoes the sentiments of many other Fuente partners, “The success of these watches is due to Carlito . . . and his overwhelming enthusiasm for working on behalf of the Cigar Family Charitable Foundation.”

All Fuente proceeds from watch sales over the past decade have gone to the Fuente and J.C. Newman families’ philanthropic endeavours. (Newman is Fuente’s longtime U.S. distribution partner; the oldest family-owned premium cigar concern in the U.S., founded in 1895; owners of the historic Tampa, Florida Fábrica de Tabaco El Reloj, the only remaining operational cigar factory in Ybor City.) The Hublot partnership contributions were earmarked specifically for the Cigar Family Charitable Foundation Arts Academy, a unique performing- and visual arts centre that is currently under construction directly adjacent to the main Cigar Family school campus in Bonao, Dominican Republic. 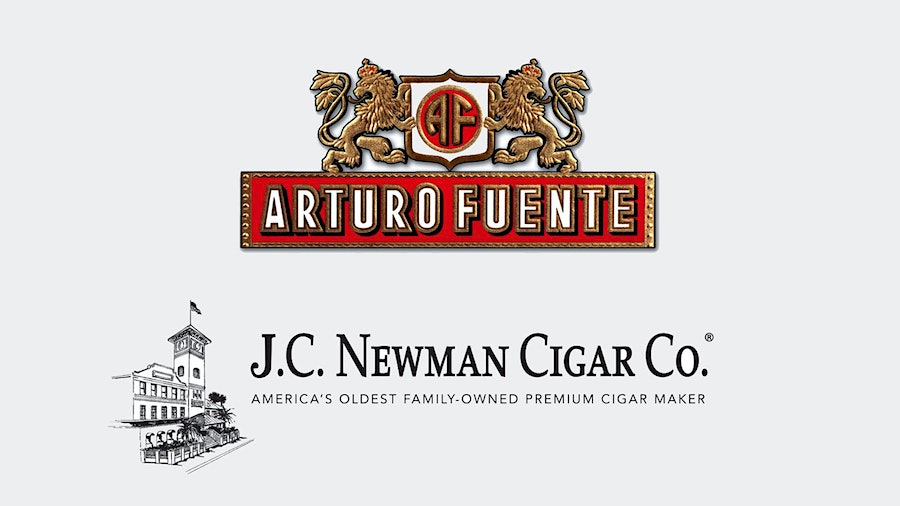 Around 2007, Hermès released a very limited edition (10 pieces) tobacco-brown Cape Cod 1928 timepiece that came in its own humidor and was created to commemorate the opening of the Hermès boutique on Broad Street in Manhattan’s Financial District.

Then, exclusively for the U.S. market, came the first “Cohiba” wristwatch made by Swiss watch manufacturer Frédérique Constant in conjunction with General Cigar Co., the maker of Macanudo and the U.S. versions of Partagas, La Gloria Cubana, and Cohiba Red Dot. (“Red Dot” to distinguish it from it the yellow, orange, and black livery of the Cuban counterpart.) This 2010 limited-production watch (376 numbered pieces, 188 in steel and 188 plated in rose gold), launched at Club Macanudo in New York, came in a showcase humidor with a glass lid, stocked with 25 Dominican-made Cohiba (Red Dot) Crystal cigars. (Frédérique Constant is owned by Citizen Watch Group, as is sister brand Accutron, the latter commission American Heritage cigarmaker La Palina, to produce a special limited-run Accutron cigar at the famed Little Havana-Miami factory El Titan de Bronze to celebrate its 60th anniversary in 2020.) 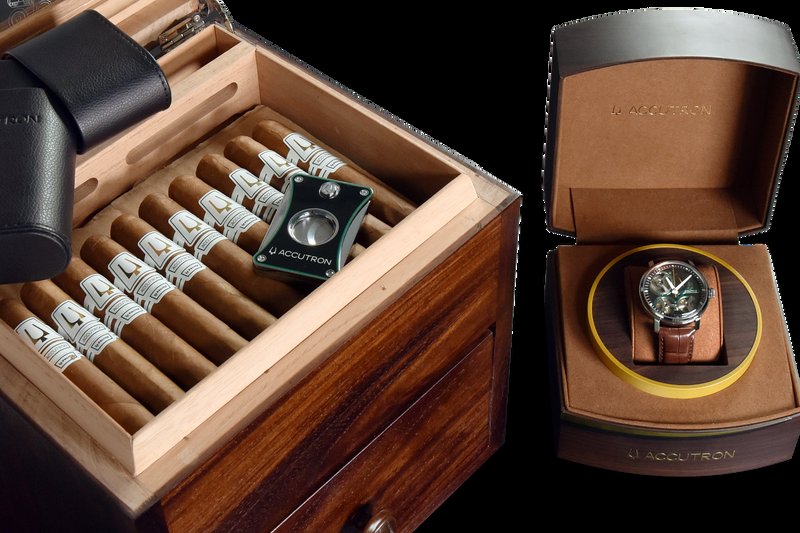 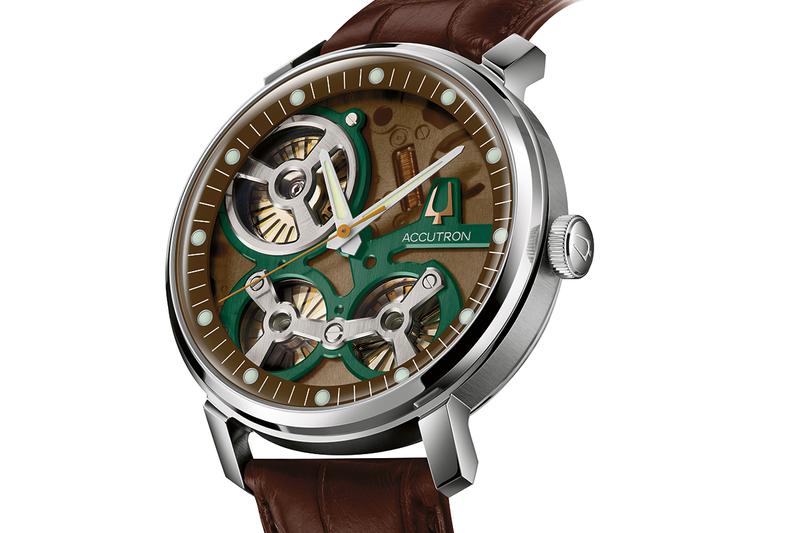 The most recent cigar-watch partnership, however, is one between the U.S. edition of Montecristo and the French boutique watch works B.R.M Chronographs—a curious pairing given that B.R.M is known almost exclusively for its automotive- and racing-inspired chronographs. (Alexandre Dumas was French, though, so there’s that, I suppose. Frederic Gasser, President of B.R.M Americas, did comment, “It’s a great privilege to add [another] French name to that legendary cigar …” Still seems tenuous, nonetheless.)

The new association, announced in May, yielded a 44mm B.R.M watch (not a Chrono) finished in signature Monte yellow and red accents and housed in a Montecristo-branded humidor-cum-watch box in the same colour scheme. The limited-edition (32 examples) offering, dubbed the Montecristo B.R.M Humidor, is somewhat evocative of the aforementioned Frédérique Constant Cohiba humidor; however, the Monte B.R.M features a built-in automatic watch winder that also comes stocked with 40 edition-exclusive Montecristo B.R.M cigars (6 inch x 52 ring gauge—essentially a cañonazo vitola, though it’s officially called a “toro”) manufactured by the Plasencia family for Altadis U.S.A., the manufacturer and distributor of the U.S. edition/non-Cuban versions of Romeo y Julieta, H. Upmann, and Montecristo. 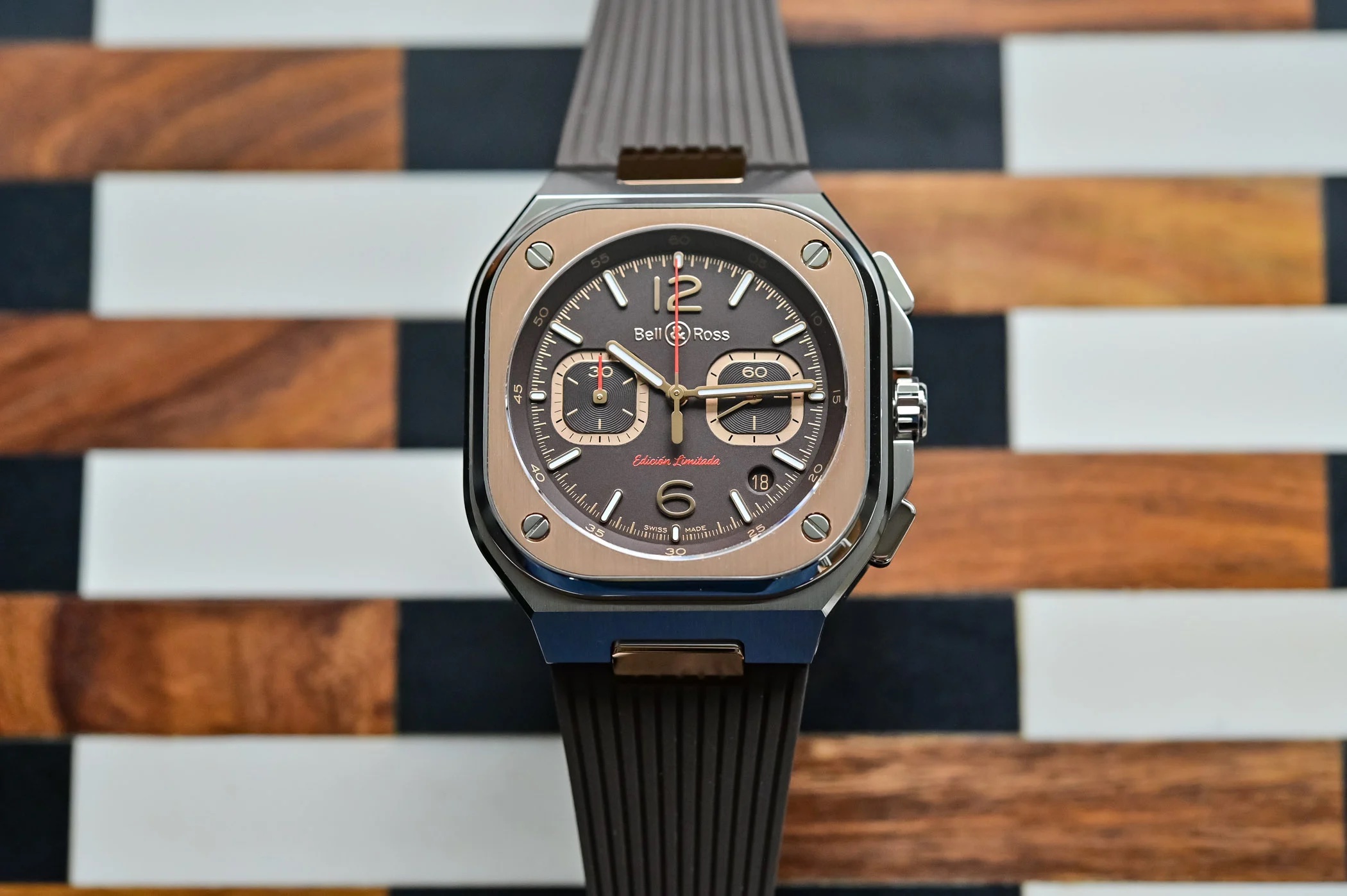 ON AND ON IT GOES

Along the way, there have been other notable cigar watches, such as the 42mm limited-edition (150 examples) Blancpain Quantième Perpétuel GMT (Ref. 4277-3446-55B) in platinum with a tobacco-hued “Havana brown” dial; and the Bell & Ross 126 XL Edición Limitada, as well as the somewhat recent Bell & Ross BR 05 Chrono Edición Limitada—all of which came housed in humidors as well, Blancpain’s made of walnut. Even Swatch made a cigar watch with an image of a full-size cigar (a Swatch-branded Zino Mouton Cadet) running from one end of the strap through the dial to the other end. These were not necessarily made with the U.S. in mind per se, but all were well-received

What will be the next cigar-inspired watch? Time will tell. In the meantime, light up a Montecristo “A,” relax, . . . and wait.