One of Cigar Keep's very best, Aaron Sigmond, is back with a two-part series. A complete guide to cigar-inspired watches. We begin with, among others, Zenith, which has lately taken centre stage within this niche watch category thanks to its current partnership with Habanos S.A. 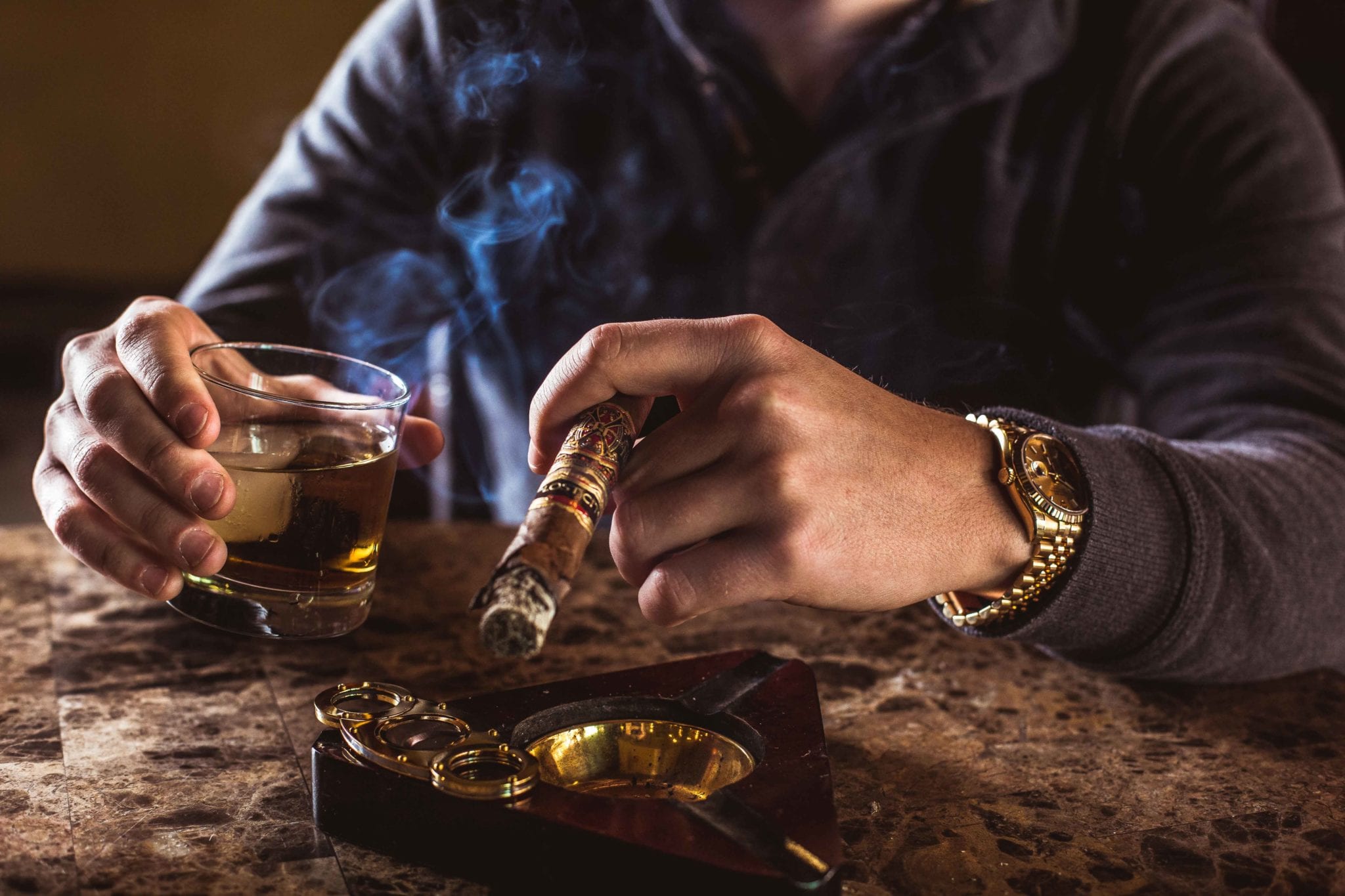 Watch collectors tend also to be cigar enthusiasts, and perhaps even more so the converse is true as well. It’s akin to the way watch and cigar guys gravitate toward wines, whiskeys, Michelin-starred eateries, bespoke suits, slippers with cheeky embroidery, and vicuña scarves: If that person sounds familiar, it should, because it’s probably you. And you, my friend, are a member of a group that possesses a keen polymath’s approach to connoisseurship, with an appreciation of the finer creature comforts—those that offer horological, mechanical, and sartorial craftsmanship and heritage, as well as epicurean pleasure. These intersecting interests, happily, prompt collaborations, especially in the case of partnerships between watches and cigars. Such pairings have been around since the 1930s, when “Tobacco Specialist” Alfred Dunhill of London sold various luxury goods, including wristwatches, side-by-side with his famed “tailored” and standard pipe-tobacco mixtures, as well as fine Havana cigars, at his historic flagship shop at 30 Duke Street, and subsequently at both Jermyn Street and Bourdon House. 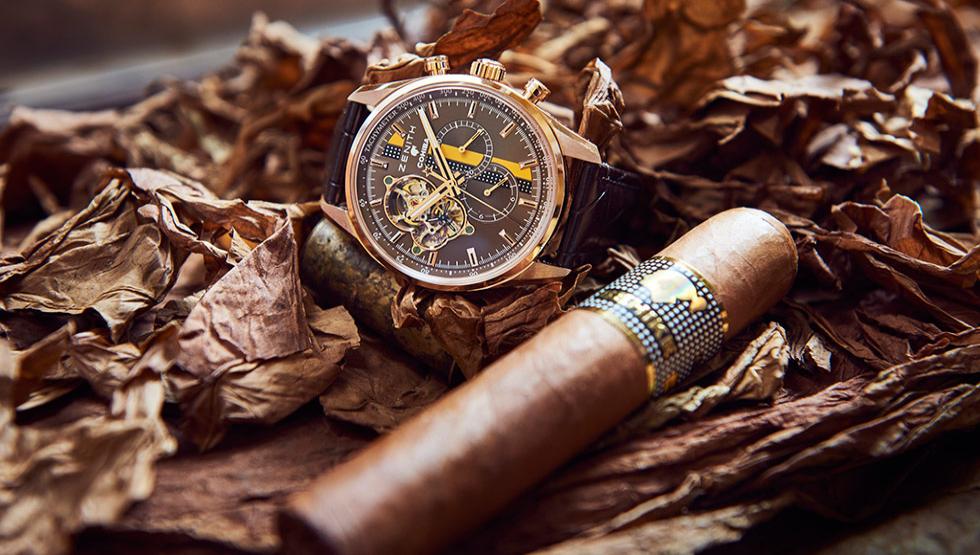 This two-part series will survey the world of cigar-inspired watches, but perhaps it’s best to start with the LVMH Swiss watchworks Zenith—which has lately taken centre stage within this niche watch category thanks to its current partnership with Habanos S.A., the Cuban cigar export-and-marketing entity.

Zenith and Habanos kicked off their (relatively) long-running and, candidly, somewhat surprising affiliation in 2016 with the debut of the Zenith “El Primero Chronomaster 1969 Cohiba Edition” at that year’s El Festival del Habano—the Cuban-cigar equivalent of Watches & Wonders, with a gala dinner and auction capping off the annual festivities. The 1969 Cohiba, timed to celebrate the cigar marca’s fiftieth anniversary, was a 42mm chronograph in 50 18-karat rose-gold examples (500 in stainless steel), with a tobacco-brown dial featuring the Cohiba livery in two vertical stripes down the right-side, all powered by the Zenith El Primero caliber 4061 automatic movement and its 50-hour power reserve. That was only the start. 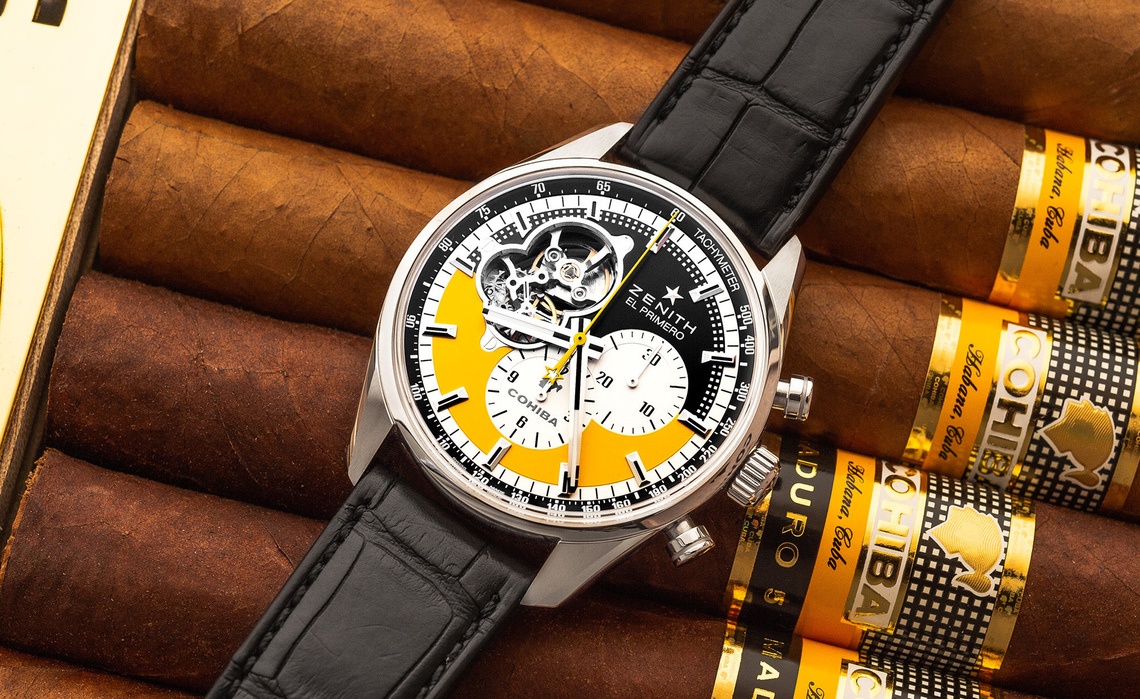 Most recently there was the debut of the third Cohiba x Zenith offering, the Chronomaster Cohiba 55th Anniversary limited edition at a virtual version of the all-things-Cuban cigar fête (“Habanos World Days Evento Virtual,” thematically similar to the festival mentioned above). This 2021 iteration—which simply screams “Cohiba”—comes in steel only, and the 42mm chronograph is powered by the El Primero 4061 automatic; it will be available at Zenith boutiques and select retailers in October. To ensure that one fully appreciates the epicurean connection, each watch will come with a set of five Cohiba cigars in a co-branded porcelain jar. With only 55 timepieces offered with the cigars, this version will likely sell out before its actual delivery date.

The 2016 El Primero was followed a year later by the “El Primero Chronomaster 1966 Legend of Cohiba Edition.” Sequentially thereafter came the 45mm rose-gold-cased “Pilot Type 20 Extra Special Cohiba-Maduro 5 Edition,” with an extra-large crown (2018); the “Pilot Type 20 Chronograph Trinidad Edition” in rose, yellow and white gold case metal offerings (2019); and the 2020 Romeo Y Julieta Elite Moonphase, a his/hers timepiece pair celebrating the 145th anniversary of the Shakespeare-inspired marca. The Mars-Venus models were understated compared to the other capsule-collection offerings. His: the 40.5mm Romeo in blue; hers: the 36mm Julieta in red and diamonds). complete chronological cataloguing below: 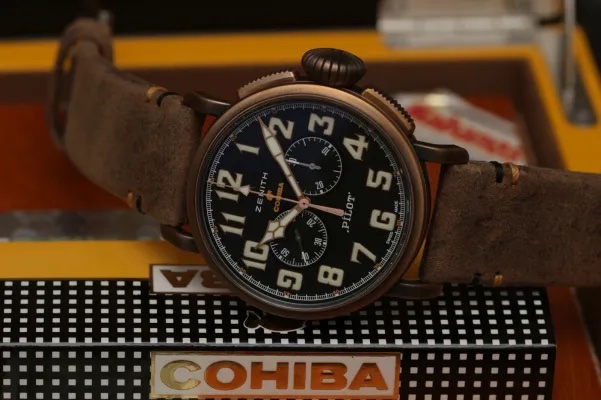 That impressive sub-collection aside, the Zenith x Habanos S.A. limited-edition timepieces were far from the first fine Swiss mechanical watch collection to boast a cigar association. For the origins of cigar-inspired watches, one must look much further back.﻿

As previously noted, watches and cigars were sold together at Alfred Dunhill Tobacco Specialist, at 30 Duke Street in London’s particularly posh St. James’s District, as far back as 1932—the year Alfred Dunhill Ltd. patented its first wristwatch. (Dunhill pocket watches had debuted in 1903; watches and clocks set into cigar and pipe lighters followed soon after.)

Dunhill continued to sell timepieces into the 2000s, but lamentably, its horological heritage—which included impressive partnerships with Universal Genève in the 1940s and Jaeger-LeCoultre in the 1960s, the latter featuring the coveted Dunhill-signed Jaeger-LeCoultre Memovox alarm models—came to an inauspicious end in the autumn of 2012, when, with little pomp or circumstance, the men’s luxury and fashion house quit offering watches altogether. (It had begun to phase out of cigars a few years earlier with the singalar exception of the aforementioned London flagship Bourdon House.)

What Cartier was to Paris, Bulgari to Rome and Tiffany to New York City, Cuervo y Sobrinos was to pre-revolution Havana. As the city’s top purveyor of fine jewelry and timepieces—Churchill, Hemingway, and Clark Gable were all said to be clients—Cuervo y Sobrinos worked with a number of fine Swiss watchmakers (Rolex, Patek Philippe, and Universal Genève among them) to produce both double-signature and private-label timepieces. 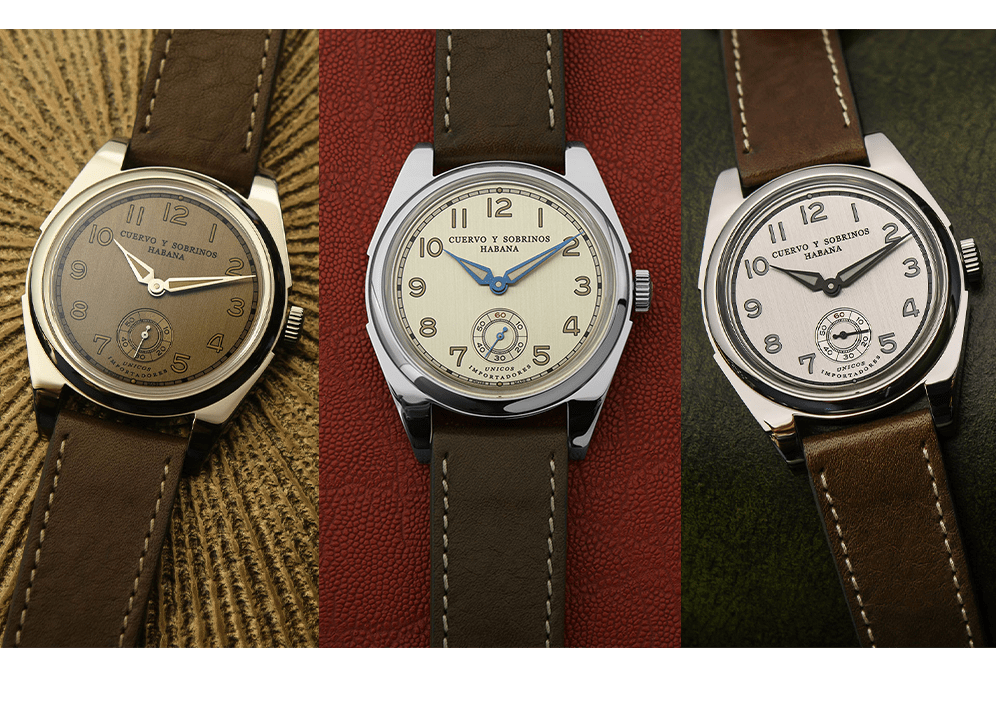 Located in Havana’s Old Town, Cuervo y Sobrinos enjoyed close corporate-gift relations with the real fábrica de tobaccos that commissioned countless custom-dial watches, with logos such as the classic Partagas script, to be given away as executive and retirement gifts. Vintage Cuervo y Sobrinos, mostly from the 1950s, pop up often on auction sites. Today, the modern incarnation of Cuervo y Sobrinos names its models after cigar vitolas, and many of its watches are presented in a humidor. Since 2009, CyS has operated a mono-brand boutique, El Reloj Cuervo y Sobrinos, on Calle Muralla in the heart, once more, of Habana Viejo. And their most recent collaboration—debuting December 2022—is one with the niche multimedia watch collector publisher Watchonista, with their Lounge sub-brand and watch collectors affinity group CronotempVs Collectors: The Lonsdale, a cigar-inspired, neo-vintage-styled timepiece in three dial colourways that comes housed in a presentation case that converts quickly to a travel humidor (Boveda pack required). 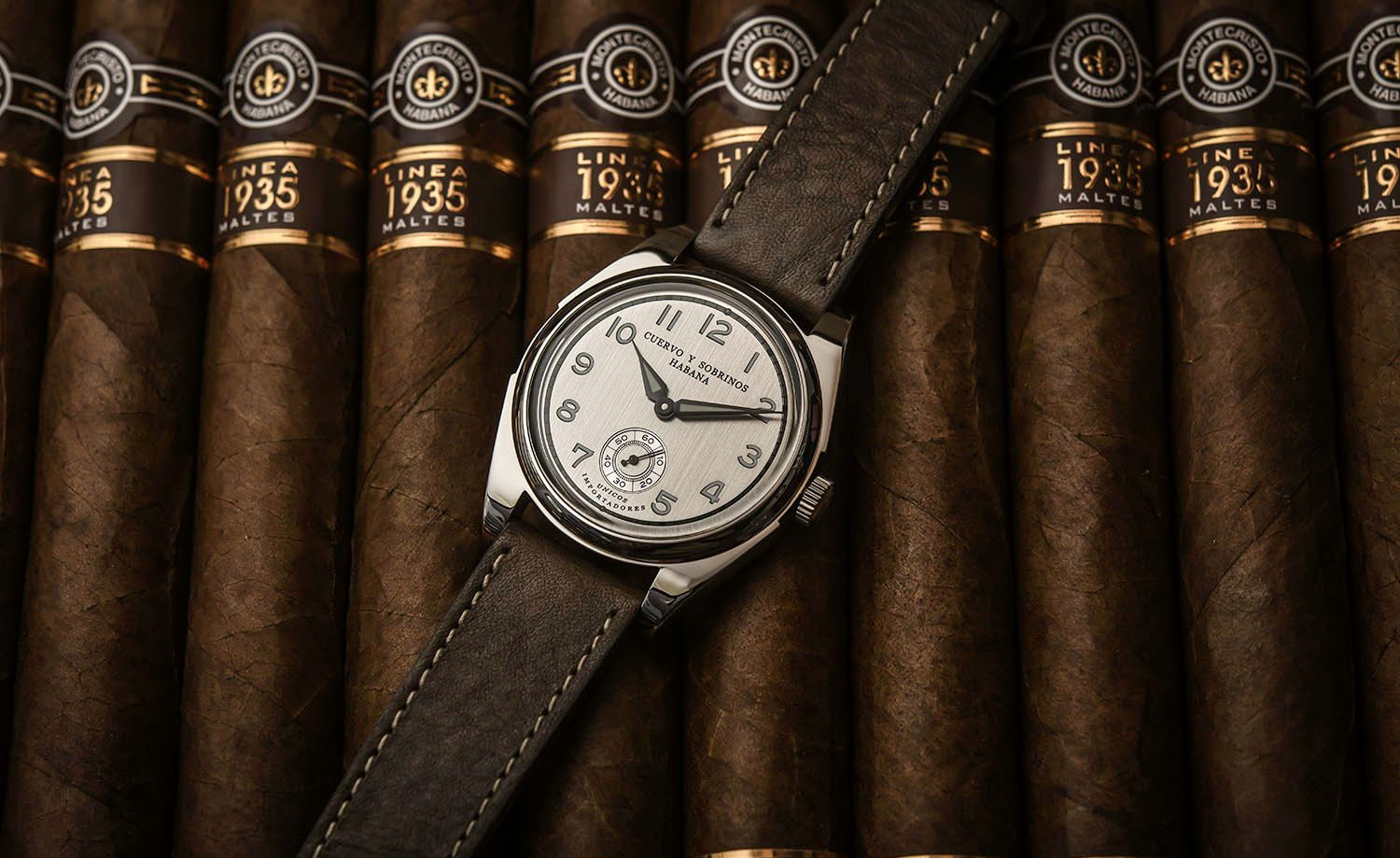 Another notable tobacconist, Davidoff of Geneva—which these days remain close to its roots as one of the world’s preeminent premium and ultra-premium cigar makers—partnered with SMH (Société de Microélectronique et d’Horlogerie, now the Swatch Group) in the 1980s to produce a small capsule collection of watches reminiscent of early-80’s Hublots and IWC-Porsche Design timepieces of the period. Whilst it was a single mono-model collection, the case was offered in multiple options: 18-karat yellow gold, two-tone, and all steel) and straps, but the watches were powered by the hand-wound, ultrathin F. Piguet Cal. 21 (today Manufacture Blancpain) movement, with a custom bridge assembled by SMH. 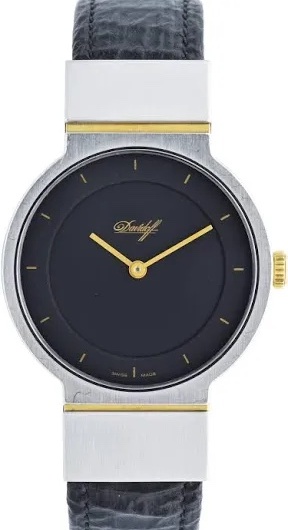 Finding an example of these early Davidoffs is a challenge, but they crop up at auction now and then, as well as on sites such as Chrono24. Today, Zino Davidoff, a spinoff luxury watches-and-accessories brand originally created to skirt draconian European Union regulations governing tobacco promotion, carries on the tradition set forth by Davidoff of Geneva’s initial horological effort.