Master of the House Reserve 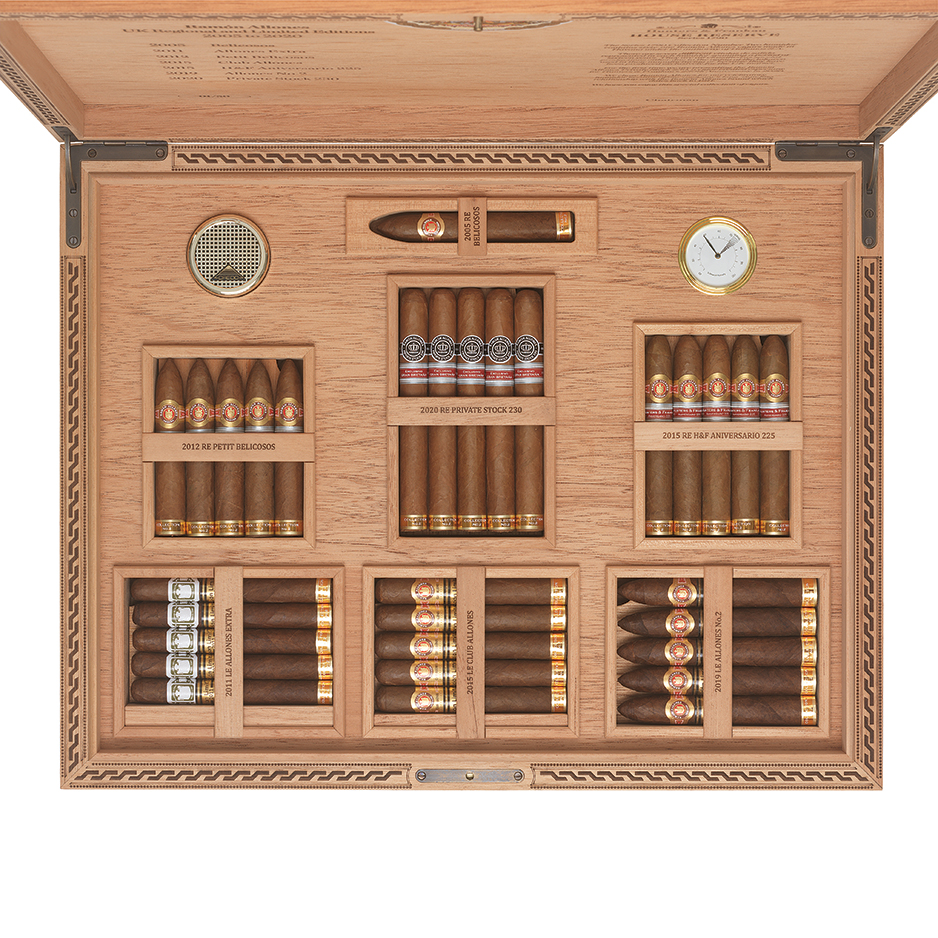 Hunters & Frankau have released a second 'House Reserve' limited-edition humidor of Ramon Allones cigars which have sold out in quick order. The contents are of such significance that no doubt every Cigar Keep member will want a peek. Max Foulkes reports...

I was lucky enough to have attended the launch of Hunters & Frankau’s first House Reserve Series Collection, alongside the release of the El Rey del Mundo La Reina, at the Churchill Bar & Terrace at the Hyatt Regency London in the pre-apocalyptic year of our Lord, 2019. This extraordinary collection of fine and rare cigars was housed in an equally remarkable humidor created by the Italian humidor makers DeART S.r.l Massimo de Munari. The collection consisted of 170 cigars, 10 of each UK Regional Edition from the line’s first release in 2005 to two years before the collection was launched. Whilst admiring the Puros artfully divided into bespoke segments, I remember vividly observing the reflection of ignited lighters dancing on the gold bands of the Por Larrañaga Magnificos located to the left of the box. Moving upwards and to the right I saw the box was signed by the inimitable Jemma Freeman, Chairman of Hunters & Frankau, which I was later informed was the case for all 30 humidors, without a doubt adding significantly to the value of the boxes. Never did I think I’d have the opportunity to lay eyes upon a collection of cigars quite as noteworthy or at all similar…until now.

The Hunters & Frankau Release House Reserve series 1790 ‘Number Two’ is now available exclusively in the UK and in very limited quantities! Having said this I’ve since been informed that all have been sold and are soon to be dispatched. Nevertheless I consider this a newsworthy and significant moment in vintage cigar releases, and wanted to draw your attention to this special moment. 50 humidors have been released (each made by the very same enthusiastic Italian craftsmen responsible for the creation of this release’s predecessor) housing 61 Ramon Allones cigars. Seven variations of Ramon are present within each humidor, both Limited and Regional, the production of which spans 16 years. If you’ve had the good fortune (‘fortune’ being the key word here) to have made one of these humidors one of your more recent acquisitions, you’ll have added to your Keep 10 Allones Extra LE 2011, 10 Petit Belicosos RE 2012, 10 Club Allones LE 2015, 10 H&F Anniversario 225 RE 2015 (an interesting Vitola named Insolito, a Gordito with a cabeza tombada), 10 Allones No.2 LE 2019, 10 Private Stock 230 RE 2020, and 1 Belicosos, the rarest of them all and the world’s first Regional Edition released in 2005. The way in which these cigars are presented is not all that dissimilar to the collection’s predecessor however, unlike before, each cigar comes adorned with a golden foot band indicating its immense rarity and value.

Hunters’ affinity for Ramon Allones derives from their long-standing relationship dating back to the very early 20th century. Because of this, I’ve come to consider Ramon more of a British cigar than it is Cuban. Either way, the blend I find best enjoyed in a colder climate, boasting intense flavour and high nicotine sure to warm the blood in the cooler months. I’ve not smoked the Private Stock 230, the country’s most recent Regional Edition and a cigar yet to hit the market outside of this humidor and in its own branded boxes, but I’ve heard only good things from close friends granted the opportunity. Apparently the first third is aromatic, incongruous with the full body of the blend and of what we’ve come to expect of the brand, but is enjoyable in its own right. The second and last third are more representative of the blend, of a fuller body with flavour consisting of a variety of spices. I’m excited to try it myself, despite it being a full 8-ring-gauge points wider than what I consider to be a large cigar. The fact that Hunters has released this so far unreleased cigar as part of their second House Reserve Series 1790 demonstrates to us all the importance of this humidor however, instead of all 50 pieces and their contents being left untouched, I implore at least one of the owners to smoke all the cigars in the box, preferably within 61 days of it’s purchase.