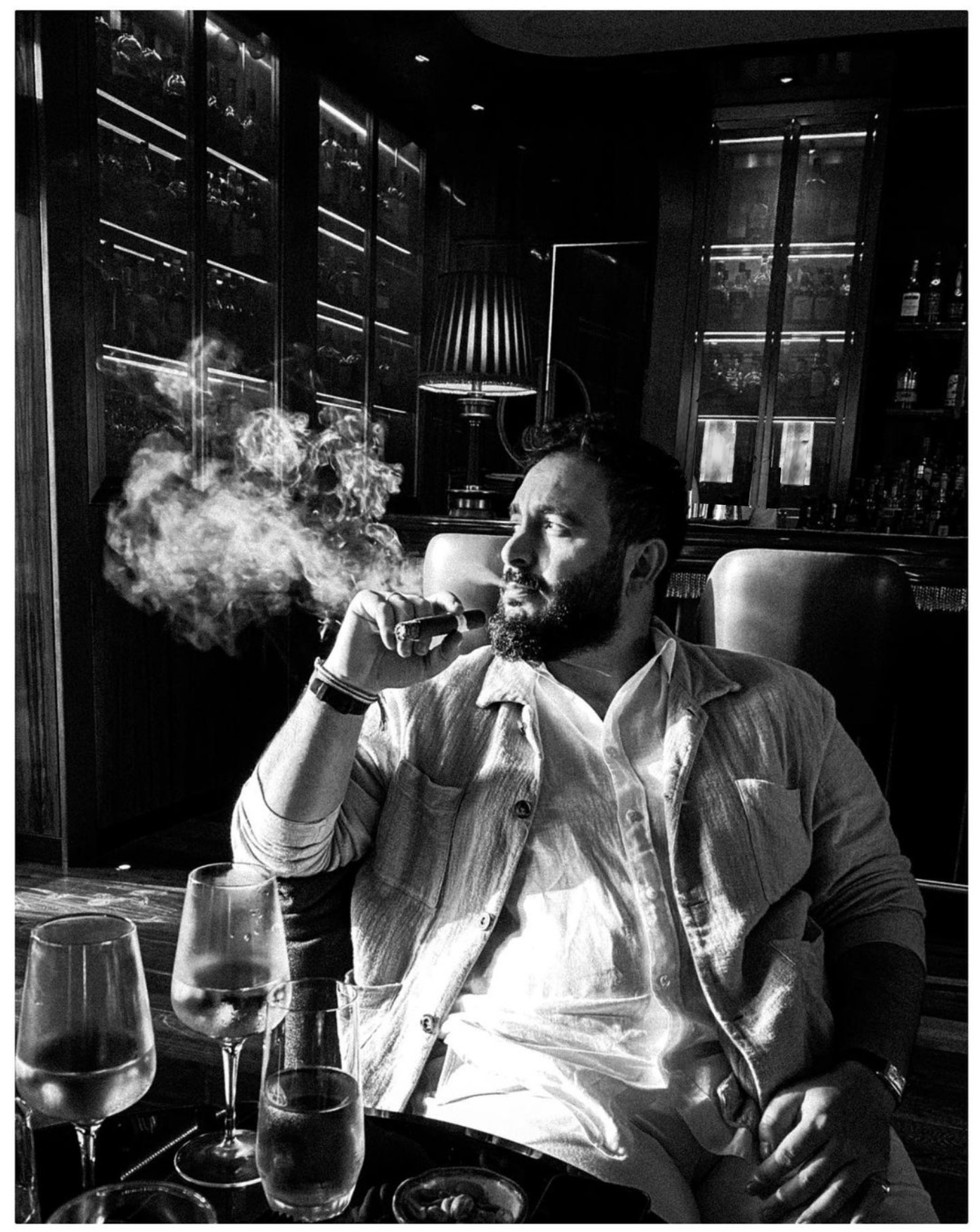 Cigar Keep's global community requires legendary figures from all over the world to join us in spreading the news and championing the cause of togetherness. This time we speak to our latest ambassador, Dozi Dreams.

The memory of my first cigar is very clear in my mind. But my passion actually started long before that. I grew up with the aroma of pipe tobacco all around me, wether in the gallery in Bond Street or in the evenings at home my father would smoke his pipe and from time to time a cigar (he has long since stopped sadly.) I recall hypnotically watching the trailing blue smoke disappear into the nothingness. It was one of the many things I find so stylish about him and knew I wanted to make a part of myself when I got older.

The "cool" appeal of smoking a cigar grew further as I watched and enjoyed inimitable films with great characters played by even greater actors. Clint Eastwood with his cowboy charoots clenched in his jaw or Lee Van Cleef with his iconic pipe, Adolfo Celi as the villainous Emilio Largo in Thunderball or Peter Sellers in the Pink Panther films setting his office on fire. Adventure, danger and laughter are all rewarding and in this case all punctuated by fine tobacco.

I must have been eighteen or nineteen years old when the time finally came for me to join the fraternity of these great smoking men. My friends and I had decided on drinks in Trader Vic’s under the Hilton Park Lane. I had no idea what I was doing at the time and therefore confidently selected a Bolivar Petit Corona and decided on a V cut. Leaning back with the reassuring heft of the cigar between my fingers I was ready to be inducted into the coolness of my afore mentioned heroes and impress my friends.

As I took my first draw my eyes filled with tears as did my companions’. I want to tell you that the experience was so moving my emotions overwhelmed me and my friends were crying with pride. I want to tell you that but I can’t, I was crying because I pulled the entire first draw back into my lungs and as I was gasping for air through my tears my friends were experiencing the same issue only though laughter!

After my false start, and regaining the faculties of respiration and sight, the sommelier very patiently offered me sage guidance on how to correctly operate a cigar. Armed with my newly gained wisdom I relit the Bolivar and the sensation of calm that swept over me as I pulled the velvety smoke into my mouth and gently allowed it to escape was Devine. I felt I had just slowly sunk into caramel and the sputtering first attempt never happened.

This is when I first learned of the restorative powers of a good cigar. I shall never forget that moment and how it exceeded all of my expectations. And perhaps with a bit more Peter Sellers than Adolfo Celi, maybe I had now became a member of that cool club too.

Like so many of us when asked this question I find it nearly impossible to offer a definitive answer. One of the many reasons is that my tastes are constantly changing; my favourite cigar in the morning is rarely the same one for an evening smoke, or when I am on a walk in the British summer versus the Austrian winter.

I love a Montecristo Open Regatta in the mornings with a creamy coffee, in the evenings (depending on how many cigars I have absorbed during the day) I am known to enjoy a Punch Double Corona. Summer walks in England call for a Por Larrañaga Montecarlos and Austrian winters demand a Belicoso Finos. My changing tastes are affected over a year as well; there was a period that I could not finish a Punch Short De Punch but now I feel great sadness and loss when I stare at the the nub of my Punch Double Corona (often wondering if a second one would just be pure gluttony.)

If I must choose a favourite then it must be a Trinidad Fundadores. Absolutely everything about this cigar excites me; the mythos of its diplomatic past, the slight variance in the ring gauge up to a 40, named the Laguito Especial, compared to the 38 of a Cohiba Lanceros, the very specific wrapper shade that, seemingly to my eyes, only appears on Trinidads and, naturally, the incomparable taste. I covet these like a dragon and smoke them rarely due to their scarcity. I am looking forward to the rumoured Anejados as reported by Max Foulkes. 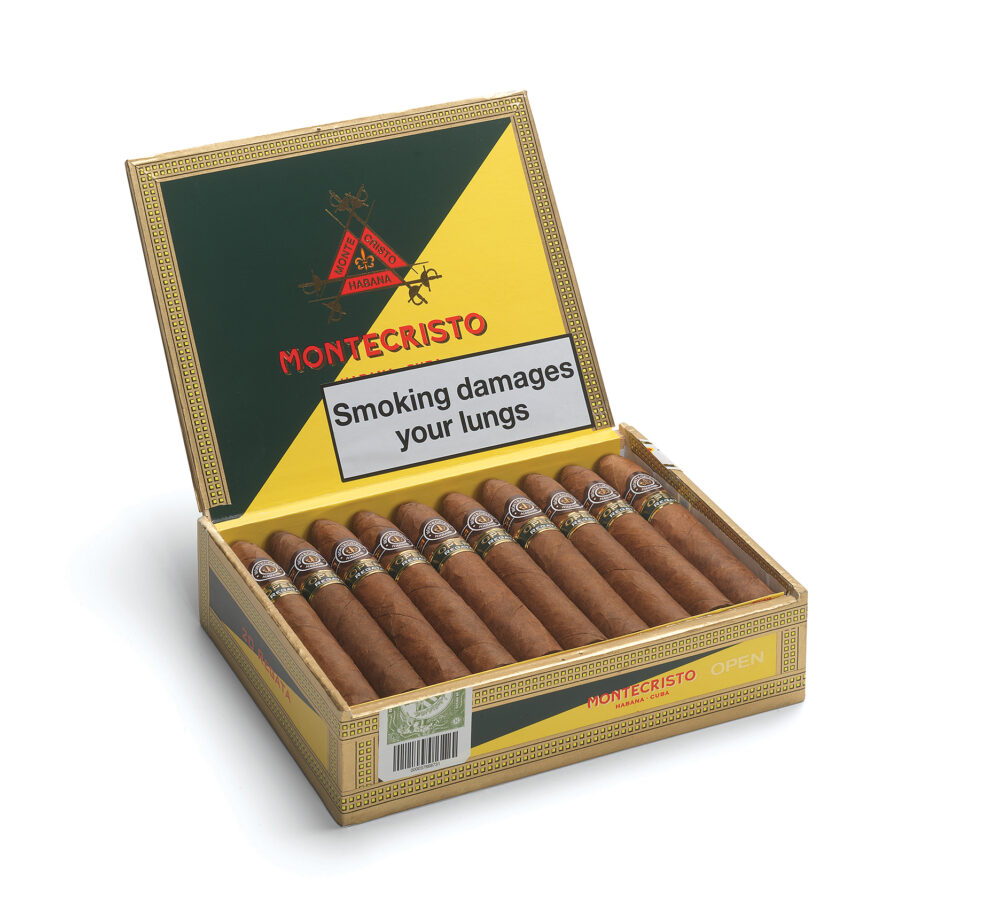 There are so many wonderful places to enjoy cigars but without question for me it must be The Churchill Club in Dubai. I actually discovered this treasure by accident. Having finished lunch and studying my cigars to see which I would smoke, I overheard the maître d' advising another of the guests about a cigar lounge on the top floor of the hotel. I had been living in Dubai for nine years at this point and was surprised to hear of a lounge that had alluded my attention.

As I made my way up to the top floor and was guided to the lounge I was awestruck. High-gloss wood panelling tastefully finished with frosted brass, deep cushioned sofas and Persian rugs. This was the classic cigar lounge but everything was finished in a contemporary way, the essence of timelessness drips off of every detail yet nothing feels archaic. I almost expected to find Dr. No seated at one of the tables.

Bossa nova softly lilted through the smoke and the floor to ceiling windows offered a perfect sunset over the ocean. The space is just big enough to fit a comfortable number of guests and the humidor is well stocked. Service is akin to the Oriental Express and the cocktails are second to none. The walls are adorned with black and white portraits of great cigar impresarios and the establishment’s namesake of course.

I feel The Churchill Club is an extension of my home and am treated as such when there. So much wellbeing comes from smoking a good cigar but the perfect environment has the ability to elevate it higher. The Churchill Club certainly does that and with such impeccable style. 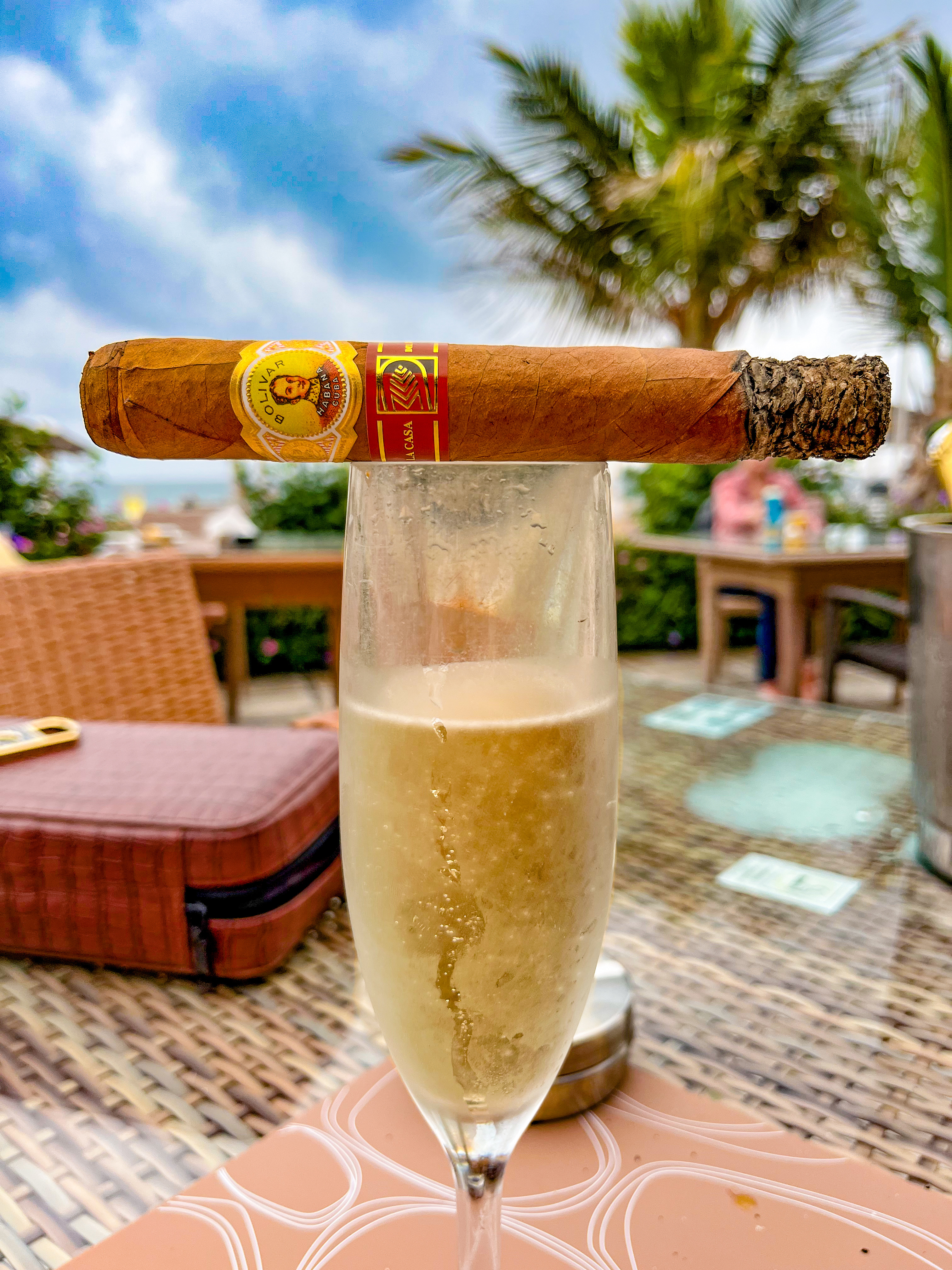 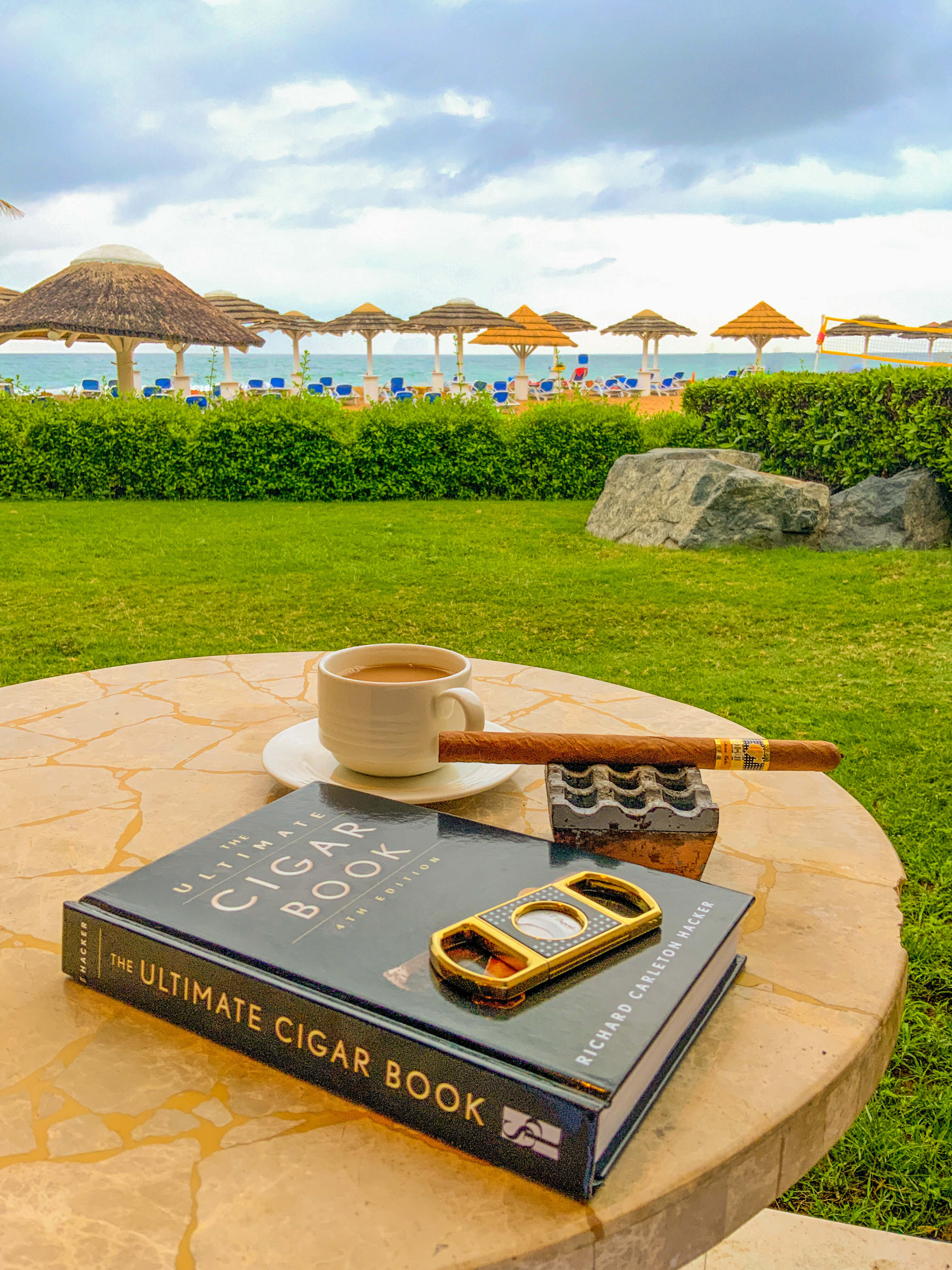 Last November, as I was hunting a box Siglo III in my local tobacconist, I was discreetly made aware that some Esplendidos had unexpectedly been made available. Instinctively I said “I shall take them!” Something caught my eye when they arrived, four of them were missing holograms on the band. With eyebrow cocked I asked my merchant if I was seeing correctly and he explained through his wide smile that indeed I was. Like a proud museum curator sharing the provenance of a rare and import artifact (possibly excavated after one of my recent golfing attempts) he explained that an old box was hidden away and forgotten about in the stores until being rediscovered just recently to my good fortune.

After what was a testing year for many reasons I was glad to see it coming to an end with the promise of a fresh new year ahead. We travelled to a picturesque sandy beach dotted with palm trees and lapped with azure blue waters. We were set to enjoy this slice of paradise for ten days with New Year’s Eve crowning the trip.

I had provisioned a decent cigar selection for this vacation: La Trovas, Libertadors, Epicure Especials, Reyes and many Siglo IIIs. Unbelievably I even found and acquired three lonely Magicos that were sitting ignored and unloved in the hotel humidor! I had brought one of the aged Esplendidos especially for welcoming the new year.

As night drew across the sky and the soft chill was kept at bay with crackling fires on the beach, I prepared to cut and light. We counted down and as the numbers decreased so did my troubles. Three, two, one… kiss. I drew on my cigar, sipped on my Prosecco and was embraced with love.. everything was right in my world.

If too many Cigar Keepers take my suggestion I shall have to suffer the anxiety of not easily finding more but I feel the Vegas Robaina Unicos is a wonderful and oddly underrated cigar. The flavour is abundant and deep. Perhaps not a complex cigar in the sense of developing and changing as you smoke, it is instead layered with successive bursts of flavour over the palette.

There is a consistent mouth watering richness with every draw. It is a sticky toffee pudding of a cigar and yes, it is dripping in treacle. I imagine these would age extremely well, Robaina generally does. I picked up a box of 23 year old Familiares from Davidoff of London a few months ago and they are smoking like a symphony.

You can thank me later. 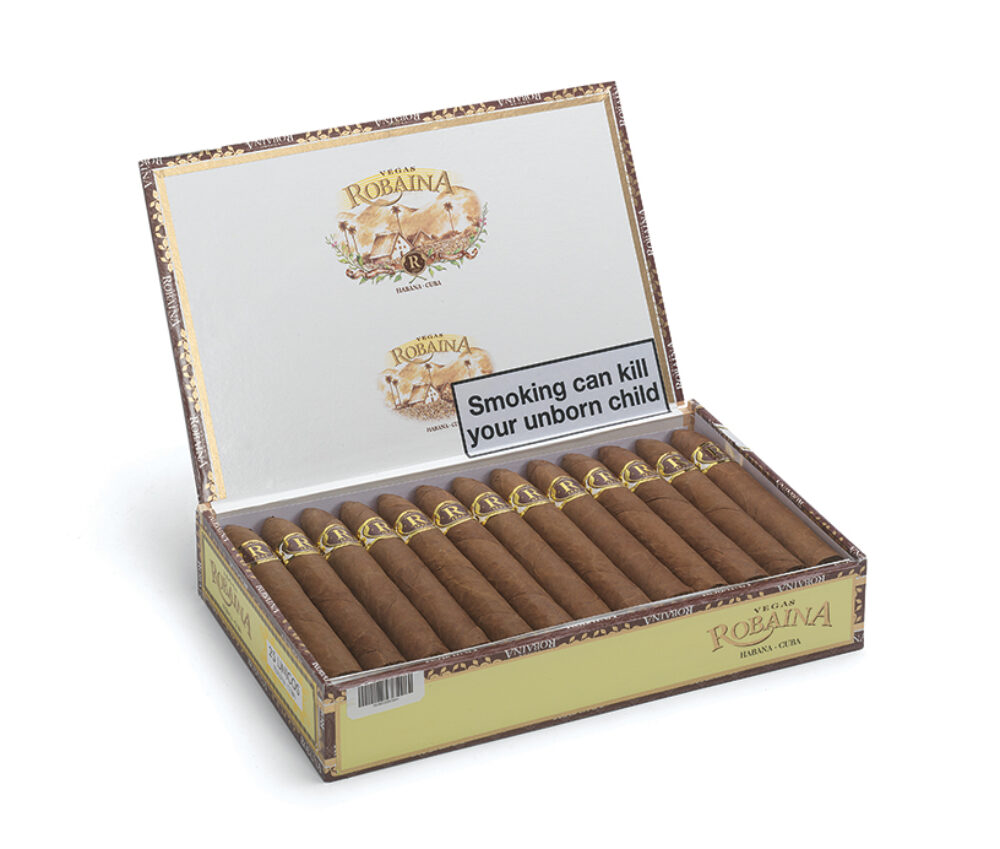